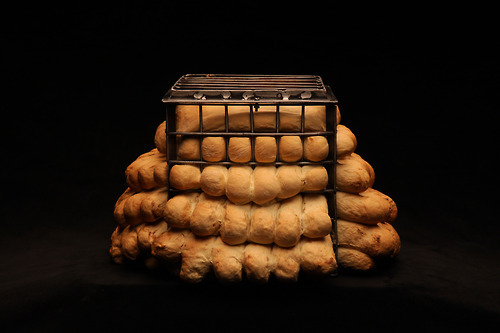 The idea of this exhibition comes from the movement of materials in his artworks.  Brogan reframes the behaviour of everyday materials such as bread or ice.  His works express the feeling of contingency which he experiences from living in two different countries, Serbia and Germany.  He perceives the Belgrade art context as favouring political and social discourse in art whilst in Berlin, his perception is that art’s discourse on art prevails.  As a conceptual artist, his experiment is to combine what is positive from each tradition.

His theoretical research (Hegel, Levinas, Lacan und Husserl) has led to the idea that art is a supersession of moments of the material and of the artist´s intention. The dialectical movement of these moments in turn intimates the notion of time in the work i.e. the rusting of a metal sculpture, the rising and baking of dough inside a cage, the melting of blue and red ice blocks in a bath.  Sometimes he simply suspends the material in an instant i.e. the sealing of wet paint within its own skin, transforming it into a hermetic object.  He would agree with Levinas’s view that the life of an artwork does not go beyond the limit of an instant.

There will be a screening during the exhibition of his Belgrade based film work The Typical Reject.  The film is based on a real telephone market research business which Brogan founded in Belgrade in 2006 and developed over the five year duration that he was a manager there.  The film shows how Brogan experiments with the documentary realism of video and the ethical and ideological jouissance and conflict which resulted from his involvement as a manager and ´artist in residence´.