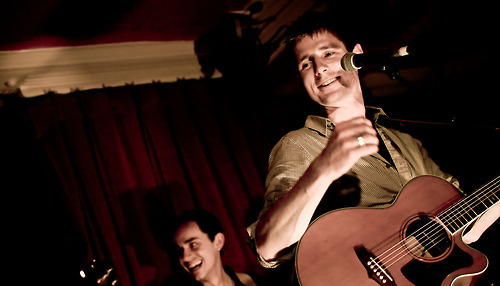 Robert Delaney is a singer / songwriter / lyricist from Dublin, Ireland. His resume includes composing to date of the title track for Irish feature film 'Between The Canals'. Songs 'New Wave' and 'Home' from his critically acclaimed debut album, 'Rising Tide', feature on the soundtracks to popular Irish TV shows 'Do not Tell The Bride', 'Fade Street' and 'Room To Improve'. Robert Has thus written lyrics for a number of Irish and UK acts of varying genres, Has published a book of lyrics and HAS BEEN a feature on Irish national radio Throughout 2012 and 2013.

With rhythm and soul, folk and blues Influences. Robert what writing poetry before he ever picked up a guitar and that love of lyricism shines through his songwriting.Following the release of his solo EP taster - 'Lilies For My Sweetheart' - Robert Delaney's debut album, 'Rising Tide' is available now from Tower Records, HMV and iTunes. This is an album about life, about love, lost and found, with soul searching lyrics and care fully crafted meoldies Which draw the listener in.
See and read more -> http://robertdelaneymusic.com/